This post is a bit more technical than the usual, and covers a kind of attack that is not only the kind of attack we may fall victim to, but an attack that we could participate in! Defences against this sort of attack are difficult, but avoiding the risk of participating in the attack is far easier.

You could argue that there is no real benefit to the organisation in avoiding participating in attacks as we are not the real victims in such circumstances; however it is (and has always been) considered to be ethical behaviour to avoid causing problems for others on the Internet. And of course the University wishes to be an ethical organisation!

However for an attacker to overwhelm a victim with more resources, they will have to use a distributed denial of service attack where they use the resources of many computers and networks to flood the victim. This is commonly performed using a collection of compromised machines (a botnet), but there is another option …

If the attacker can :-

Then the attacker has themselves a viable attack. A simple illustration of this most simple form of this attack appears below :- 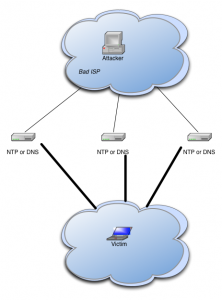 As you can see, I have labelled the attacker’s ISP as “Bad ISP”. This is because unless the ISP allows for forged network traffic, then the attack cannot get past the first hurdle. It has long been best practice to block forged traffic (see BCP38), and yes we do.

Unfortunately there are vast numbers of ISPs out there who do not block forged traffic.

Once an attacker has access to a poorly configured network that allows them to forge the source address in network packets, then they have to find the next step – a service that can be used to amplify the attack. The essentials of such a service are :-

As it happens two very widely used services – DNS and NTP – are ideal for this kind of attack. If they are configured in a naive manner, the attacker can use them to amplify attacks considerably.

To simplify things I have left out some additional details. The attacker is likely to use a large collection of compromised machines to send the questions to the naively configured services. This increases the amount of denial of service traffic enormously … if an attacker has 1,000 compromised machines and the amplification factor is 10, then 1,000 streams of 1Mbps turns into an attack of 10Gbps.

This entry was posted in Uncategorised. Bookmark the permalink.