There are all sorts of “dangerous” files that can appear within a web server’s document root; some are merely potentially dangerous but some can be genuinely dangerous. For example, if someone uses an editor to change a .php file, it is possible that a backup file for that script will be created within the document root called something.php~, and because this isn’t a genuine php file, it won’t be interpreted by php so the source code of your php script could be visible publicly :- 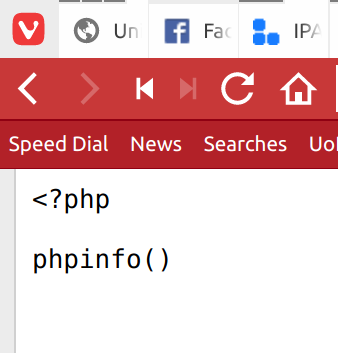 This is not something you want to see!

To protect against a whole set of similar attacks, blocking access to certain file “patterns” is a sensible precaution. The following can be added to a .htaccess file or to the main Apache configuration file (preferred) :-

The contents of the “FilesMatch” directive is effectively a list of regular expressions alternatives (grouped by enclosing in “(” and “)” and separated with “|” = standard syntax). For the benefit of documentation the individual clauses are :-

Once the change has been made, check the configuration with apachectl configtest. Providing that returns no errors, restart Apache gracefully with apachectl graceful.

This entry was posted in Technical and tagged Apache, FilesMatch. Bookmark the permalink.